Mathieu started the World Waveski Tour in 2007 bringing professionalism into the sport. He ran three events, one in France and two in Reunion Island attracting top riders from around the world to compete for prize money.

Mathieu collaborated with Xaver Walser over many years assisting and staring in numerous waveski movies. A highlight being the making of “Gateway to Sorga” which was filmed in the iconic surf location of the Mentawai Islands.

Mathieu also runs a surf school where he teaches waveski, SUP, surfing and bodyboarding and more recently started a surf camp “Octohouse” and OctoJuice, a snack bar on the beach. He is also formally managed the Solamanzi brand. More information can be found here www.octopusglisse.com, www.octosup.fr

Mathieu first developed a passion for the ocean on a bodyboard then later at the age of twelve was given a ride on a waveski at Les sables d’olonne in France. After that first ride he was hooked and would spend all day in the water, school permitting.

Mathieu attended his first world titles in 1992 at La Torche France where he first met Nicki Carstens. He was so impressed with Nicki’s surfing, Mathieu tried to emulate his style and credits Nicki for the surfer he is today.

Mathieu’s big breakthrough came in the 2003 World Titles in Guadeloupe where he overcame the raging hot favourite Dave Dinning to claim his first open title. His most prized memory is the 2006 World Titles in Durban South Africa  where he won the Open, New Age and Open Series, his girlfriend Caroline Angibaud won the women’s and Caroline’s brother Lionel won the Juniors.

Mathieu has traveled the world with his waveski to Indonesia, Polynesia, Mexico, California, Hawaii, South Africa, Australia, New Zealand and more. He has recently taken up SUP racing for cross training and in 2012 won the Battle of the paddle 12’6 Open division. Mathieu list his other hobbies as motor cross, downhill and cross country skiing, surfing and SUP surfing.

Mathieu always tries to present the best image for the sport encouraging the younger generation to get involved. 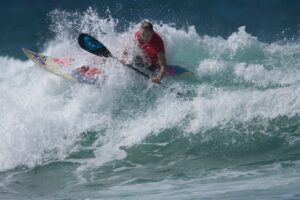 Caroline started waveski surfing in the summer of 1996 in Les Sables d’Olonne in France. She was already an accomplished surfboard rider 2 years prior and discovered waveski surfing completely by chance. Caroline wanted to have some surf lessons and it was fully booked and her only option was waveski lessons. She was immediately hooked and went on to join the local club where the instructor was Mathieu Babarit (Junior World Champion at that time).

She started competing in Autumn that year and went on to win the French championship the following year. She placed 5th in her first World Title (after surfing 11 waves in the semi final…) then proceeded to dominate the sport at a world level for many years to come.

Her best memories in competition was the World Titles in South Africa in 2006 where Mathieu Babarit (her boyfriend) won the Open Title, her brother, Lionel Angibaud won the Junior Title and she won the Women’s and Women’s tag team Titles with friend Coralie Jousset!

In 2007, she was invited to take part in the movie “Gateway to Sorga” in the Mentawai’s. The movie was directed by Xaver Walser and Caroline got to surf some of the best waves in the world alongside some of the world’s best male Waveski riders.

Caroline retired from Waveski surfing following her victory in the 2009 World Titles in Australia and has since taken up the sport of Stand up Paddle (SUP) boarding. She now competes in the surf division of SUP and has won 3 the National Titles, the 2014 European Title and finished 2nd at the 2014 World Championship’s in Nicaragua. She has been member of the national team since 2013. Caroline also just won her first World Tour SUP event in Hawaii in February 2015.