A cracker of an interview with Bruce Viaene. He didn’t have much choice as he and his two minders Tony Dubber and Chief Photographer Dalton Burton are staying at the same surf camp as me. Bruce was also kind of bribed with the small gift of a kayaksurf.net ‘t’ shirt.

Bruce was born very late last century - incubation 1987 and was introduced to the sport of Waveski Surfing by his older sister Michelle in 2001. However he ceased participating in 2006 and only took the sport back up in 2016 with his first competition in 2017.

The break did him the World of good as he won both the South African Open and New Age in 2017. One wonders what might have happened had he not had the long break between drinks. 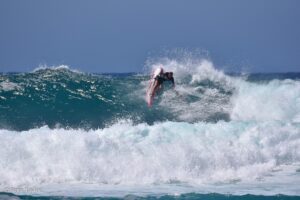 He touts his home break of Nahoon Reef in East London as simply the best wave particularly for anyone wanting to execute large carving manoeuvres. Interestingly Bruce reckons the emergence of wave parks as the future for Waveski competitions as it will always have a consistent wave and no need to worry about tides, crowds etc. He makes a valid point.

We need to move on with this interview on because the Sun is starting to cook us and really he’s only just arrived following a marathon trip from South Africa.

So some quick rapid fire questions and answers

Works full time as a photographer

He is married with two children

He lives in East London - the wave capital of the World

He is sponsored by

Inspired by his own personal commitment and the development of adaptive Waveski surfers.

My summation - a charismatic and passionate fine young gentleman (too much Sun) with a hunger and desire to perform at the highest level. He will turn a few heads at this competition and don’t be surprised if Bruce Viaene takes home some of the silverware. 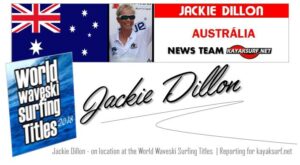